Foreign investment springs growth, progress, change in a positive way and brings the progress of physical, economic, environmental, social and demographic components.  Foreign direct investment is the catalyst to the development in an integrated economic system, which is open to take the investment from foreign countries. Globalization has slowly taken the world. The main feature of financial globalization and liberalization—FDI, to attract FDI several cross border linkages has been established and many provisions have been set to attract FDI. The provisions include a set of the legal, regulatory and institutional framework. However, Nepal does not attract sumptuous amount of FDI the inflow is ponderous in comparison to other neighbouring countries where FDI is high, having said that the trend of FDI is increasing but slowly. A recent report of Nepal Rastra Bank states that there has been investment from 39 countries and investment has been made in 252 firms in Nepal. In 2015/16 FDI stock reached Rs137.7 billion (6.1 percent of GDP) which was motivated by the rise in reserves of FDI-based industries. Two third of FDI stock is present in reserves. Among many sectors where FDI is constituted, service sector tops the list accounting 70.2 percent of the share which is considered exceptional among other sectors. India is the highest contributor to FDI in terms of paid up capital. But if the FDI is calculated using total stock of FDI by including reserves and loans then West indies tops the list with total FDI of RS 62.8 billion as of mid July 2016.

Foreign Direct Investment can be made in any of the following forms:

Foreign direct investors can own to 100% shares/equity in any of the industries except the following industries:

"Private Limited Company" means a company which by its articles:

The approval process of the FDI process is listed below 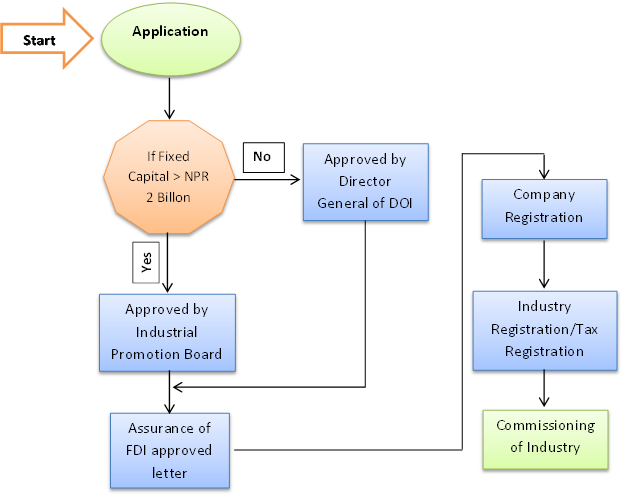 Note: If the capital investment is more than NRs. 5 million, the Investment Board can directly deal with the investor, and the procedure will be followed accordingly.

The new FITTA’s section 15(2) states that the accent will be provided within a week after all the application and documentation process is submitted. However, there are certain loopholes in the section that has not been drafted clearing the path for the different argument to be done. Similarly, it is not clear whether the documents should be submitted or not to obtain the approvals.

Previously under the FITTA 1992, there was a provision of second approval for foreign investment from Nepal Rastra Bank- the central bank of Nepal through a different application procedure under the Foreign Exchange Act 1962. However, the new FITTA 2019’s section 16 (1) provides only notification or information to the central bank for obtaining the first approval from DOI, making the cumbersome process a cupcake. However, the sub-section (2) provides that the procedures set out by NRB must be covered. It is a wise choice for investors to apply for getting second approval from the central bank until the section is clearly stated.

To open the industry under the authority of the provinces must get the prior recommendation from the Ministry of Industries of such provinces to approve the foreign investment.

The FITTA also provides for “automatic approval” and “single point service center”. Automatic approval provision is not effective yet until further notifications from the government.

The FITTA 2019 describes foreign direct investment as (a)  investment in share or equity; (b) reinvestment of the derived earnings from the share or equity;  (c) asset made in the form of credit or loan facilities. The minimal investment requirement for foreign investment approval is Rs.  5 million per investor. Furthermore, the act also defines the technology transfer which is allowed even in the area where foreign investment is not permitted. Use of technological rights, specialization,  formula, process, patent or technical know-how of foreign origin; use of any trademark of foreign ownership and acquiring any foreign technical consultancy, management and marketing service are the forms of technology transfer.  However, there are some industries like cottage industries, security printing, arms and ammunition industries, among others, where foreign investments are not allowed.

At first, the foreign investors must be registered in the Inland  Revenue Department(IRD)and comply with the tax system. If the company has a turnover of more than 5 million, they need to register for Value  Added Tax (VAT). The foreign investors must fulfil the requirements set by the income tax, corporate tax, interest tax, profit tax, payroll tax, capital gain tax etc. However, there are some relaxations in tax for the industries in FDI have been offered in the Industrial Enterprises Act, 2016

.The central bank of Nepal--NRB oversees the foreign exchange management in Nepal, and the foreign Exchange (Regulation) Act,1962 is the guiding regulation for it. Those foreign investors, who fulfil the criteria given by rules, can invest or take out (withdraw) investment. Likewise, Nepal has also adopted the recent exchange arrangement and exchange restriction of Article VIII of IMF.

.Foreign investors after registering at the office of Company  Registrar and Tax Office should apply for the approval at NRB to bring in FDI to  Nepal. In general, foreign investors must commit to keeping their investment in Nepal at least for a  year. The company can also borrow from abroad at LIBOR plus a reasonable premium rate in case required amount and interest rate is unavailable domestically. Furthermore, Nepalese citizens can also borrow  USD 0.5 million or INR. 50 million at zero interest rate from abroad at least for 5 years. 41.NRB provides the repatriation approval to the FDI on the basis of recommendation from the concerned regulatory authority. Foreign  investors can repatriate the amount received from the sale of the share of foreign investment as a whole or any part thereof, amounts received as profit or dividend from foreign investment, amount received  from the fees or royalties or supply in case of technology transfer, maximum 75 percent of the earning of foreign nationals working in foreign investment company.

FITTA 2019 has a provision that provides laxation to repatriate bonus, profits, dividends, earnings, proceeds of the sale of shares and furthermore proceeds of liquidation and amounts recovered from legal proceedings, which are given permission in FITTA 2019 but not clear in previous legislation.

However, the investor must show the strong proof that they have followed all the laws, agreements and obligations so that they can easily get permission for repatriation. This is a very difficult test in law and is bound to create more uncertainty and discourage foreign investment. In addition to this, applicable taxes should also be paid.

There is a need for approval from the responsible authority and the central bank of Nepal i.e Nepal Rastra Bank for each repatriation.

Top 10 Sector To Invest in Nepal

About 60% of Nepal’s population has access to electricity whereas 40 percent of people still live in darkness.

The demand for electricity surpasses the supply of electricity and the demand is increasing at the rate of 7-10 percent per year.

Nepal is a virgin land for development of infrastructure and industries which consumes electricity.

Many rivers to produce electricity have been identified and DPR of the projects of the rivers also have been done however, due to lack of potential investors the development cannot go at a stipulated rate.

Nepal is a land linked country. Due to undulating topography, transportation is arduous. Therefore, there is room to create more transportation facilities., road transport, cable car and water transport etc. are business opportunities to cash in future.

Still, in the 21st century, there are several gaps in the transportation sector of Nepal. The roads are in poor state filled with potholes. Therefore, there is an urgent need for developing better transportation service in Nepal.

Monorails and electric railways are the emerging modes of transportation at the incipient stage.

Nepal is an agrarian country. Still, agriculture is the major source of livelihood for more than 65 percent of people. Moreover, 30 percent of GDP is contributed by agriculture. However, subsistence farming is what Nepalese farmers are attracted to. There is still a wide chance of commercial agriculture inside the country. Furthermore, there a big loopholes in the agriculture sector from production until it reaches the kitchen of people. The loopholes in post-harvest technology, marketing, agribusiness management must be meticulously resolved using the latest techniques. Similarly, other reasons for including agriculture in the top 10 list are as follows:

No matter how rich people get, people need food to eat and the population of Nepal is growing at a rapid rate.

Nepal has a high range of topographical, climatic and geographical variation which allows verdant products to grow in a small area.

Fertile soils still remain unused due to lack of investment.

Hills and mountains of Nepal are suitable for adventurous games like rock climbing, hiking, trekking, and other adventurous sports.

Nepal is the biodiversity hotspot where many species of birds, mammals, and insects are found.

Nepal is the birthplace of Lord Buddha and the go-to destination to observe unique architecture and heritage.

Comparatively, there is a low number of star hotels outside Kathmandu.

The number of tourists visiting Nepal is growing at a faster pace.

Wilderness activities and the presence of unique flora and fauna is another reason why tourism is yet to flourish properly in Nepal.

Each day, new routes, new destinations, new trials and new adventure activities are opening up in remote locations of Nepal, creating a void, to be filled in by carrying out tourism-related activities to the locations.

Nepal consists of highly skilled guides and porters, who can be hired for a comparatively lower wage.

The warm and welcoming inhabitants of the country attract more and more tourists into the country every year. Tourism is hence of the 10 best sectors to invest in Nepal.

Some of the reasons why infrastructure could be the sector to invest in Nepal:

Aftermath of 2015 earthquake caused destruction of buildings and there is a need for earthquake resistant high-rise buildings.

The work force is cheaper and easily available.

IT company are slowly grooming inside country thanks to the foreign direct investment inside the country by some of the large firms. However, considering the investment and the market there is still a big pothole to fill because a large number of IT firms are congregated inside the valley and small towns still have untrained manpower who can be trained and used in IT sector. The reasons why IT is considered one of the best 10 sectors to invest in Nepal are illustrated below:

Due to the cheaper wage, the works can be outsourced to Nepal.

The cost of operation is comparatively cheaper in Nepal compared to other countries.

The market is open and big potholes need to be fulfilled to make them saturated.

Only a few IT firms provide better and world class service inside Nepal.

Nepal is a virgin land to explore the mines and minerals. Nepal is not only rich in natural resources like water and forest but also rich in minerals, forest, herbs and shurbs. It is said that Nepal is filled with minerals—both metallic and non-metallic minerals deposits as well as decorative materials like marbles and granite. Some of the reasons to consider mines and minerals business to be the best 10 sectors to invest in Nepal are illustrated below:

There is a huge number of mineral deposits all across its Himalayan vicinity.

There is no or very few or the countable number of mineral extracting businesses and less number of feasibility study has been done on the matter.

There are huge opportunities in this sector because this sector remains untouched like the pristine mountains.

The output will suffice the investment in future.

we want some invester